Canelo-Golovkin II: Keys to the Fight

Boxing's biggest fight of 2018 takes place at the T-Mobile Arena in Las Vegas on Saturday: the rematch of Saul "Canelo" Alvarez (49-1-2, 34 KOs) against Gennady "GGG" Golovkin (38-0-1, 34 KOs). Last year, the two elite middleweights fought to a controversial draw. Although it was a competitive fight, judge Adalaide Byrd's ludicrous 118-110 scorecard for Canelo marred what would have otherwise been an enjoyable night of pugilism. Most boxing observers had Golovkin edging the bout or at the very least fighting Canelo to a draw, but no one saw the fight like Byrd did.

Originally Canelo and Golovkin were scheduled to fight again in May, but Canelo failed two tests for performance enhancing drugs. He was subsequently suspended for six months by the Nevada Athletic Commission. Naturally, accusations and recriminations ensued between the fighter camps, their defenders in the media and their respective fan bases. The usually mild-mannered Golovkin made numerous inflammatory statements about Canelo after the failed drug tests and it's clear that as they enter the ring on Saturday, there's no love lost between them.

Read below for the keys to the fight. My prediction will be at the end of the article. 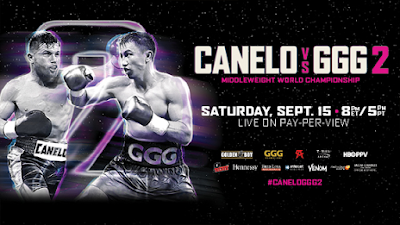 1. What did they learn from the first fight?

Both boxers left a little on the table during their first fight. Golovkin only intermittently went to the body. Alvarez didn't let his hands go consistently. Each fighter gave the other too much respect.

The template for improvement is clear for both. Canelo needs to fight closer to three minutes a round. Hopefully he can trust his conditioning and give a consistent effort throughout the match. It was Canelo who closed stronger of the two in the first fight, which begs the question of where was that energy level throughout many of the middle rounds of the bout.

Golovkin has a world-class chin, perhaps the best in boxing. He should trust it more. He was overly concerned with Alvarez's counters and while it's important to remain defensively responsible, he needs to remember that he can take a shot. Ultimately, neither boxer fought with full confidence last September. It will be interesting to see which one will be able to make the necessary physical and psychological adjustments to perform better in the rematch.

2. The elephant in the room.

We don't know for 100% certainly if Canelo has been using performance enhancing drugs, and if he has, for what duration? Canelo claimed that the failed tests resulted from tainted beef, which has been a problem in parts of Mexico. However, his story was certainly not bought by many boxing observers.

PEDs can provide a multitude of benefits during training camp and in the ring. They can help with endurance, cutting weight, adding muscle and recuperation, among other factors. If Canelo has been a frequent user of PEDs, how will he perform while fighting clean (he is now tested year-round by VADA)? We may never get definitive answers to these questions, but they are certainly worth considering during the fight on Saturday.

After receiving his suspension, Canelo decided to have arthroscopic knee surgery during the down time. As recently as a few weeks ago, he was still sparring with a sleeve on his knee. This type of surgery is fairly routine for athletes, but the recovery period can vary. Naturally, if Canelo's knees aren't 100%, this can affect his mobility, his ability to evade shots and perhaps planting and throwing with maximum effectiveness.

Of course he might also be completely recovered by fight night physically, but does he trust his knees 100%? Has he been training at less than full throttle as he recovers? If Canelo can't move like he would want to, it is certainly possible that we get a much different fight on Saturday, one that could very much turn into a slugfest.

And if he enters the fight with a sleeve on his knee, that would be a good time to place a last-minute bet on Golovkin. I don't wager on boxing, but my one rule is: never bet on the guy with a trick knee.

At 36, Golovkin is at an age where elite skills often start to decline rapidly. More than a few observers noted that Golovkin didn't seem to be his menacing self against Daniel Jacobs and again when facing Canelo last year. Was that a function of age and decline or was it simply that he was finally fighting better opponents?

Golovkin did have the superior work rate in their first fight, but decline could manifest on Saturday in a number of ways: Will his accuracy slip? Will he be able to pull the trigger when he sees openings? Can he counter as effectively as he had before?

GGG has been through a lot of training camps throughout his career, in addition to hundreds of amateur fights. Although he hasn't been in many wars as a professional, he surely has experienced significant wear and tear on his body. Will Father Time be calling for him on Saturday or does he still have another elite-level performance in him?

This fight might very well come down to which boxer will be able to take the necessary risks to win exchanges and secure close rounds. Their first bout featured a number of swing rounds (close rounds which legitimately could have been awarded to either boxer) and both fighters will want to win frames more decisively in the second go-round. To win, Golovkin might need to take a few more shots than he would like to. Canelo may have to increase his work rate beyond his typical comfort level. Both of these scenarios could lead to fatigue or getting hurt later in the fight.

Although both fighters have a plethora of technical gifts, the match may be decided by desire. Which one will step on the gas? Who will consistently land harder shots? Who will decisively win exchanges? Most fundamentally, which fighter will want it more, and who will be willing to do what it takes to get the victory?  The corners in this bout will play a very important role in goading their respective fighters to give more of themselves in the ring than they did in their initial foray.

I scored the first fight 116-112 for Golovkin, although I believe that Canelo was the better fighter on a punch-by-punch basis; he just wasn't busy enough. I'm more than a little bit concerned about Canelo's physical health coming into the rematch. Even if there's a 5% reduction in his mobility on account of the surgery, that could give Golovkin a decisive advantage.

Surely Golovkin will go to the body more in the rematch. He should have confidence knowing that he can withstand Canelo's best punches. I also think that Canelo will fight harder in rounds where he is having success, hoping to remove doubt from the judges.

Ultimately, I don't think that Canelo will fight for three minutes a round over 12 rounds. He takes too many breaks and Golovkin will still have his jab and work rate to nudge ahead in rounds where there isn't sustained action. I believe that the rematch will resemble the first fight but with a more consistent attack from Golovkin. Canelo will impress at points in the match but will then retreat to his familiar lulls. At the end of the night, Golovkin will have his hand raised, having been the more consistent boxer in a competitive fight.

Adam Abramowitz is the founder and head writer of saturdaynightboxing.com. He's a member of Ring Magazine's Ring Ratings Panel and a Board Member for the Transnational Boxing Rankings Board.